The government’s vaccination policy has reserved a 25% quota for the private sector, but analysis of actual inoculations till May 30 shows that private centres account for barely 7.5% of total doses administered. The proportion exceeds 10% in only seven states/UTs and 80-odd of the 750 districts listed on CoWin. Even within this, it has been concentrated in a few urban pockets, with just 25 districts in some of the country’s largest metropolises accounting for 54% of all private vaccination.

In almost 80% of districts, the public sector has provided over 95% of all vaccine doses so far. The private sector’s share is less than even 1% in half the districts, especially in predominantly rural areas and in the Northeast.

The highest shares of private hospitals in vaccination are, not surprisingly, in urban mega sprawls like Bengaluru, Delhi, Hyderabad, Mumbai, Kolkata and Chennai with the Bengaluru municipal corporation (BBMP) area recording the highest share of the private sector — 44%.
TOI’s Insight Group downloaded data from CoWin for over 1.6 lakh vaccination centres as of 7am on Sunday. The centres were then categorised into public and private and the data analysed to arrive at relative shares. The data is for all doses administered from the start of the drive on January 16 — about 20.8 crore, of which the private sector administered about 1.6 crore. Of these 1.6 lakh centres, we were unable to clearly categorise a little over 17,000. But these account for barely 0.4%, or 9 lakh, doses and so would not change the picture significantly.

Is 25% vaccine quota for private sector justified?
The analysis raises questions about whether a 25% quota for the private sector is justified by actual performance. It also underlines that such a quota seems to be discriminating against semi rural and rural populations since the private sector is almost entirely limited to urban settings and within them to the larger cities, one of the concerns flagged by the Supreme Court.

Among states and UTs, the highest private sector share in vaccination (21%) was in Delhi, followed by Chandigarh (15%), Telangana(14%), Maharashtra (13%), Tamil Nadu (12%) and Karnataka (12%). However, even in Delhi, there were districts like northeast where 99.85% of vaccinations have been done in government centres. Similarly, even in the most urbanised state of Tamil Nadu, there are districts like Kallaikurichi, with a population of about14 lakh, where the private sector hardly exists in the vaccination landscape.

With rural India being home to over 65% of the country’s population, and hence being almost entirely dependent on the government for Covid vaccination, this raises the question of how giving the private sector such a big role is supposed to spur vaccination as argued by the Centre. In many ways, vaccines, which are said to reduce hospitalisation and severe disease, are even more necessary for the rural populace which has little or no access to health infrastructure and what there is of it is poor. 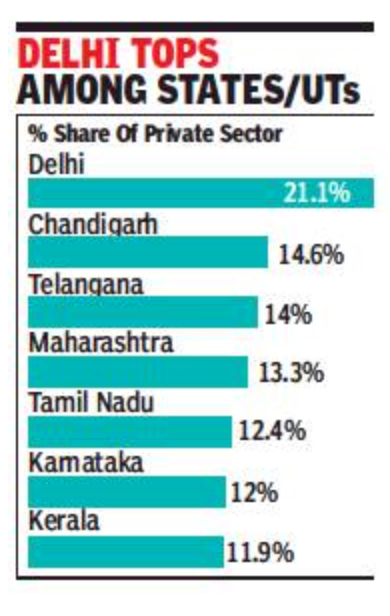 The analysis raises questions about whether a 25% quota for the private sector is justified by actual on-ground delivery. It discriminates against rural and semi-rural populations — that’s over two-thirds of India — since the private sector is almost entirely limited to urban settings and within those, to the larger cities, one of the concerns flagged by the Supreme Court. In many ways, vaccines, which are said to reduce hospitalisation and guard against death, are even more necessary for a rural populace that has little or no access to health infrastructure. Also, how does it serve the larger objective of spurring vaccination and achieving ‘herd immunity’? If the pandemic should have taught the world one lesson, it is that no woman or man, nation or region is an island – and for urban Indians to believe that what happens in our villages will stay in our villages would be a fatal fallacy.

About the Author: webo